How should one treat a historical period marked by the hardship of war and destruction of culture and identity? The approach nowadays presented as the appropriate one, based on proliferation of national and religious symbols and affirmation of the heroic dimension of war, seems to be largely politically motivated. If a symbol of that sort becomes embodied in a monument, it reflects a value system that cannot be maintained forever. Besides, how is it possible that such an agonizing historical period should embrace valour as its single characteristic? Can we allow for collective memory to be deleted and replaced by a more suitable one defined by individual criteria? Therefore, in the process of commemorating our own memory we cannot accept the form with an imbedded meaning, one that is not adaptable to relativity of historical interpretations, or the form which cannot communicate with its temporal and spatial context.

The design of war and victim memorials should aim at reduction of massive monumental sculptures that serve only to emphasize historical events. It is necessary to provide a free, “transparent” space devoid of any redundant national and religious symbolism, which would offer the context for responsible rethinking of history and dignified yet critical commemoration.

Memorials are defined as materializations of collective history whose effects should catalyze and stimulate collective memory. However, the form of the so-called traditional, mimetic memorial has proved to be inadequate in case of memory preservation. This kind of traditional memorial form seems to stand for an unfinished gesture which uses a predefined form to conserve the memory. The process of recollection, an undeniably traumatic experience, especially in case of war victims and sufferings, becomes fixed by the use of the traditional memorial form whereas the visitor's role is reduced to distant and passive observation. There is a need for creating a space which would become a sensory experience and cause deep emotions and stimulate contemplation in the interaction with visitors.

The aim is to redefine the idea of a monument as a public, symbolic act and to transform it to a form based on process, participation and reconciliation. A monument dedicated to invalids and victims of the Croatian War of Independence should not be built only upon a material basis; it should represent a synthesis of recollection and contemplation. Visitors' participatory role should be emphasized in the creation a new memorial - anti-memorial.

The proposed concept is based on the idea of treating the whole urban space, as a memorial category. The aim is to use material, otherwise used for destruction of space, as a constructive element in the creation a new public space. Primarily, it forms a platform paved with 2021 equally distributed bomb shells used in the Croatian War of Independance. However, only the bottom discs of the shells remain visible at the surface. Seemingly endless repetition of circular shell profiles creates a graphic pattern, thus avoiding a direct connotation with weaponry. The process of creating the memorial opens a possibility to inscribe one's own experience of war by donating a bomb shell as a personal war memorabilia. Except for its symbolic function, the suggested material belongs to army resources and shows an economic and reycling potential as well.

The idea of the monument is not to achieve a fixed ambient, rather, it is conceived as a transformable composition whose meaning emerges from the ways we approach it and spend time within it. The shells, the dominant elements at the surface, are characterized by a gold brass colour which reflects light and conveys a ceremonial and dignified atmosphere. The subtle cuts can be interpreted as tectonic movements of the surface, or faults. The density of the shells increases at the place of the faults. The perforations evoke scars that have put a mark on war invalids. Those “scars”, however, reflect optimism, future, glorification of life. They are manifested as green spots, the nature, subject to the changes of seasons. The focus of the surface is marked by the highest point of its deformation and is achieved by rising one of its corners. The focus is not situated at the centre; nevertheless, it can be recognized in the cross section as the clear and logical element, especially noticeable from the pedestrian point of view. Being maximally raised, it put the final accent to the rhythmical pattern of the surface. 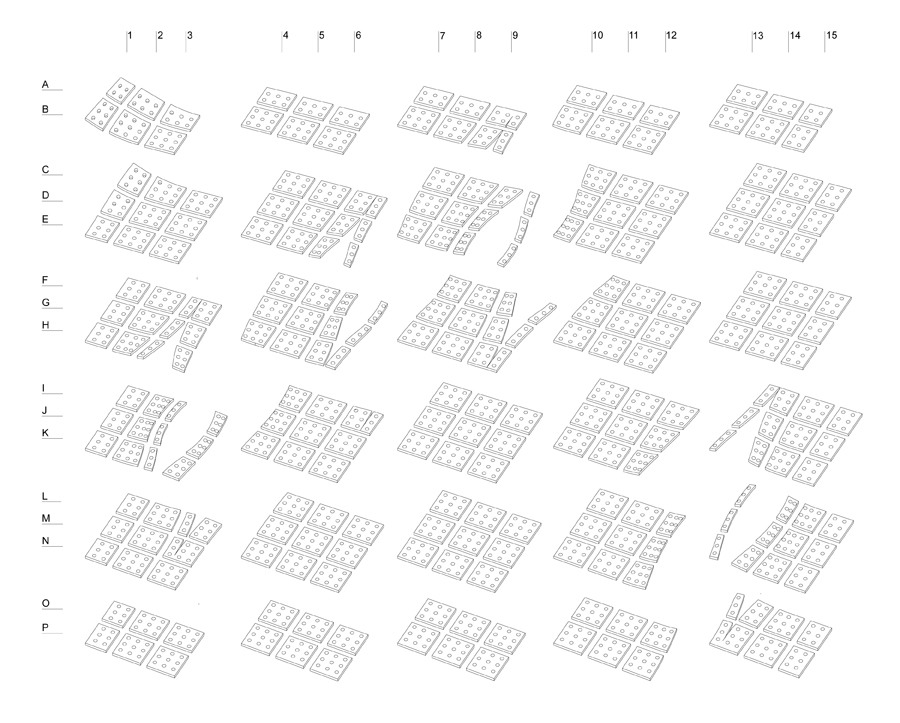